Joshua was involved in a major motorcycle crash on August 1, 2020. Due to some events that took place at the hospital Joshua was told by a nurse that he should share his experiences via podcasts. She felt his rehabilitation story would be helpful to others. Joshua soon realized that he has had many other life experiences, and that the lessons he has learned might be of value to others.

Everything Joshua shares in these podcasts have one purpose, to somehow help other people who are going through struggles in their life. Joshua wants to give the message that There is Hope no matter what you are going through.

These podcasts are interviews with Joshua Adam Dover and his father Pastor Richard D. Dover. They are listed in chronological order, starting with the first recorded podcast.

If you need someone to talk to feel free to give Pastor Rich a call at 1-866-WANTGOD anytime. To listen to other There is Hope Podcasts, click here.

As Joshua and his father Richard talked it became evident that there are multitudes of experiences in the Marines that Joshua has equipped him to deal with his current rehab from a tragic motorcycle crash.

Joshua describes what PTSD is and shares his personal struggle with PTSD while in and out of the Marines. His personal stories give much insight into PTSD. Joshua shares one of the best things that happened to him was to come to the realization that he had PTSD and to get counseling to help him deal with PTSD. 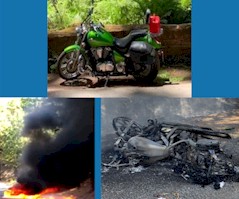 In this interview Joshua shares about the injuries he incurred from his motorcycle crash and his first thoughts while in the hospital. Joshua was fearful, anxious, angry, confused, and felt God was punishing him. But he called out to God for help and his perspective changed. That part of his journey will be shared in another interview. We end this interview sharing that God is not against you but for you. He loves you so much that He sent His son to die for you so that you may have eternal life.
Spiritual Resources

In this interview Joshua shares what his first thoughts were when he woke up in the hospital after a major motorcycle accident. For the first 7 days he thought he was captured, and a prisoner of, Al Qaeda. He was trying every tactic he had learned in the Marines to find a way to escape. This delusional thinking was as a result of the side effects of the pain killer they had given him. He had no pain but was having delusional thinking. We as a family were thinking this was evidence of him having a brain injury. We were obviously many times praying without knowing what was going on, but God still answered our prayers.
Spiritual Resources

Joshua Adam Dover and Pain-Part One

In this interview Joshua shares about his battle with pain and what has helped him to deal with up to level 10 pain when no medication will work. Prayer has been very important and he has no doubt that prayer has been effective. There are times the prayers of others may not bring relief from pain but bring peace in the midst of the torment of high level of pain, a peace that passes understanding. Also there were things his mother and sister would do to help him when he had unbearable pain in the hospital. His story shows the importance of having an advocate for those who are hospitalized.

A continuation of interview with Joshua regarding dealing with uncontrollable pain.

Joshua and his father talk on a variety of topics regarding Joshua’s journey after a tragic motorcycle crash. Joshua shares some of his dark moments, what happens when PTSD ‘kicks in’, how important perspective is in regards to life challenges, the importance of getting help when going through life issues, and that There is Hope. Anyone who has been listening to these podcasts clearly understand things have not been easy for Joshua but at the end of the day he has hope.
Spiritual Resources

This podcast starts out with Joshua’s father talking about their estranged relationship and then goes into the spiritual journey of Joshua. It is clear God is a miracle worker and waymaker. If you would like to learn about Christianity, Jesus, how to have eternal life, go to: Spiritual Resources

Joshua gives an update of rehabilitation and recovery from his motorcycle accident. In this segment we cover his upper body.

Joshua shares update on his rehab from his motorcycle accident. In this podcast he shares that he no longer has the uncontrollable throbbing of his leg and convulsions, but sadly when he gets into level 7 and up pain they continue to happen. UPDATE The good news is since the recording of this podcast Joshua had the surgery to remove the filter and it was successful. Bad News is he had stroke symptoms later. Turned out he had an episode of conversion disorder, he was battling level 9 pain.. Found out one of the major reasons for his high levels pf pain is hip surgery did not work, his hip bone is actually dying. So he will need a hip replacement surgery. This is a big setback but Joshua will ultimately have relief from much of the pain he has currently.