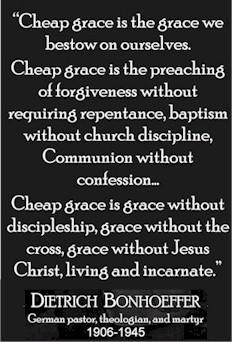 What is Cheap Grace?

“What shall we say then? Are we to continue in sin that grace might increase? May it never be! How shall we who died to sin still live in it?”

God’s grace has everything to do with our position in Him, our relationship with Him, our salvation in and through Him, our standing before Him, and our identity as new creations in Him. Cheap grace operates not in those things, but in the deceitful workings of a person’s behavior. Cheap grace can never accomplish what God’s grace can.
Cheap grace allows you to justify your behavior; God’s grace justifies your person.
Cheap grace will center its focus and attention on the “things” of God, and not God Himself. It will focus on “behavior” instead of relationship. It concentrates on a “life-style” instead of a life of obedience.
The grace we bestow on ourselves is ultimately self-centered no matter how “Godly” it may appear. So when someone says that grace is just a license to sin, that is correct assessment of cheap grace. Cheap grace is grace that does not require death, that is death to the flesh and the self-life.

Romans 6:1-2 What shall we say then? Are we to continue in sin that grace might increase? May it never be! How shall we who died to sin still live in it?

Romans 8:16, 17, The Spirit itself beareth witness with our spirit, that we are the children of God: and if children, then heirs; heirs of God, and joint-heirs with Christ; if it so be that we suffer with Him, that we may be also glorified together. There is nothing cheap about it. Free, yes, but not cheap—God has His part and that is what makes us free, BUT we also have our part in response.

It wasn’t and isn’t cheap, for anyone—God gave His life out of love, and now, because of that, empowered by the Holy Spirit, we can do the same—give our lives to Him and to others in love! This is the gospel truth—the gospel of Christ, the gospel of the Kingdom, the gospel of His Grace—all one in the same!

Grace cost God everything! It cost the price of his Son. How much do you suppose that is worth? Should our lives account so much that God sacrifices his Son? It is mind boggling, but apparently to God we, his sin twisted creatures, are worth the sacrifice.

Grace was not cheap to Jesus. It cost him his life. Let us think for a moment what it must have been like as God incarnate was treated like dirt. Jesus, the Second Head of the Trinity, was born a vulnerable baby. He lived a life that ultimately ended in suffering. He, the sinless one, was unjustly accused. Jesus was mocked, spit upon, cursed at, and denigrated. He was punished for our sins. My sins. Your sins. He died a criminal’s death on the executionary device known as the cross. He, who knew no sin, became sin in our place and the wrath of God was poured out on him. It cost Jesus his power, security, pride, friends, and connection to the Father. Grace is not cheap; it cost Christ the most priceless gift, his life. And yet he still says, “Father, forgive them for they know not what they do.”

Cheap grace mixes God strengths with ours. It never fully destroys the self-life and in fact, it often enlists it to accomplish what it will. Cheap grace is the grace we bestow on ourselves and base on our idea of right and wrong. Cheap grace is not concerned with righteousness, but with duty and obligation. True grace is not about us; it is all about God. True grace isn’t concerned with right and wrong, but is given because of the righteousness of Christ. True grace is given and can only be appropriated (applied) in our lives through the power and person of Christ. That, as sin reigned in death, even so grace might reign through righteousness to eternal life through Jesus Christ our Lord. Romans 5:21.

God’s Grace is not Cheap