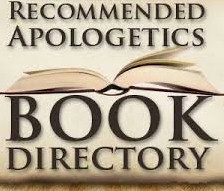 Learn More About Christianity and Jesus

Apologetics is the religious discipline of defending religious doctrines through systematic argumentation and discourse. Early Christian writers who defended their beliefs against critics and recommended their faith to outsiders were called Christian apologists.

We have listed the following books that may be helpful for someone who is wondering if the Bible is true, has questions about Christianity, or is a new follower of Jesus Christ.

The book listed below is what turned me from an atheist to a Christian. It is written for someone who is rational, logical, and questions the validity of the Bible:
Evidence That Demands A Verdict, Vol. I by Josh McDowell
Josh McDowell provides scholarly, intelligent, well-grounded answers regarding the validity of the Bible. These answers are backed by solid evidence that will satisfy anyone who is willing to honestly weight it.

The New Evidence That Demands A  Verdict–by Josh McDowell
The New Evidence that Demands a Verdict maintains and strengthens McDowell’s original arguments for the validity of Christianity. Jam-packed with information, this book looks at why the Bible can be trusted, including its historical reliability and accuracy. McDowell explains who Jesus is, and why the New Testament record of his personality and ministry is the best and most authentic source available. He also explains how several worldviews have attempted to discredit Christianity, particularly through the methods of biblical, form, and textual criticism. McDowell also examines several philosophical systems, including skepticism, agnosticism, and mysticism, and offers a cogent defense of the idea and reality of miracles.

More Than A Carpenter by Josh McDowell-book
In More Than A Carpenter, Mr. McDowell focuses upon the person who changed His life-Jesus Christ. It is a hard-headed book for people who are Skeptical about Jesus deity, His resurrection, and His claims on their lives.

The Case for Christ by Lee Stobel
Join the award-winning former legal editor of the Chicago Tribune as he cross-examines scholars to uncover incontestable evidence supporting Jesus’ claims. Includes updated archaeological material, an interview with Strobel, and more.

The Case for Faith: A Journalist Investigates the Toughest Objections to Christianity by Lee Strobel
Why does God permit evil? Why do some prayers go unanswered? Why has God allowed the church to engage in brutality and hypocrisy? Tough questions demand convincing answers. Join journalist Strobel as he once again journeys across the country challenging philosophers, theologians, and ordinary believers to defend their faith. The evidence he uncovers may surprise you!

Creation: Facts of Life by Gary Parker
Take a scientific look at DNA, embryo development, fossils, “early man,” and other topics critical to the creation/evolution debate in terms that even non-scientists can understand! This biblically based book is written by a professor of biology who “enthusiastically” taught evolution until he attended a Bible study led by a chemistry professor. 215 pages.

Darwin on Trial by Phillip E. Johnson
Is Darwin’s theory of evolution really the settled fact experts insist it is? Johnson, a Berkeley law professor specializing in logic, dissects Darwinism’s scientific support and finds it woefully short on logic and severely lacking in confirmatory evidence. This rigorous-yet readable- book is a great introduction to the controversy over evolution. 195 pages.

Skeptics Answered  by Dr. James Kennedy
Is the Bible reliable and accurate? Can we prove that God exists? Who was Jesus? How can there be evil if God is good? These are some of the most-asked questions at the heart of this faith-affirming look at Christianity. Clear, factual, and well-reasoned, Kennedy’s answers will provide you with solid assurance for every doubt. 240 pages.

Many Infallible Proofs  by Henry M. Morris III
Christianity is the only religion in the world founded on historical evidence, say the Morrises. In this compelling book, they show you “many infallible proofs” that will give you renewed confidence in the authority of God’s Word. 381 pages.

The Historical Jesus: Ancient Evidence for the Life of Christ by Dr. Gary Habermas
He examines archaeological, textual and extra-biblical evidence, and provides a strong foundation for the existence and deity of Jesus. This study will strengthen your faith, and equip you to present a strong case to seeking unbelievers.

When God Doesn’t Make Sense  by Dr. Dobson
When we are entangled in life’s crisis, it is common to feel great frustration with God. Our inability to figure out what He is doing creates the greatest agitation. The “Why?” question, which even Jesus asked from the cross, is often left unanswered for years or perhaps for a lifetime.