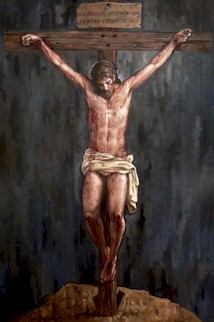 Justin Martyr
Justin Martyr was an early Christian apologist. He made clear reference to a document called the Acts of Pilate in a letter addressed to the Roman Emperor Antoninus Pius in AD 150. Describing in detail the crucifixion of Jesus he writes:

And the expression “They pierced my hands and feet,” was used in reference to the nails of the cross which were fixed in His hands and feet. And after He was crucified, they cast lots upon His vesture, and they that crucified Him parted it among them. And that these things did happen, you can ascertain from the ‘Acts of Pontius Pilate’

Justin went on to list many of Jesus’ miracles such as the healing of the blind and the lepers. He also credits Jesus with raising people from the dead. This description of Jesus’ deeds is concluded with the following words:

Justin must have assumed that this record still existed in the official Roman archives and that Antoninus Pius could verify the facts easily. Justin’s whole purpose in writing his letter was to obtain mercy from the highest official in the known world, thus sparing the Christian community a persecution which was becoming so commonplace. It is unlikely that Justin would ask a Roman Emperor to check a document if he did not feel extremely confident that the document existed. Otherwise, he would be foolishly putting his own life and reputation at risk.

There is currently not one original copy of the Acts of Pilate. It also appears the Acts of Pilate had some mean things to say about Christians, so later in time copies started being circulated that were edited. Even though there is no manuscript, again there had to have been something that said what Justin was quoting or he would have no defense.

Tertullian, a Christian leader
Tertullian (160-220AD), wrote to Roman officials about the unusual events surrounding the trial, death and resurrection of Jesus. Discussing a time when the Roman Senate actually considered classifying Jesus as a Roman deity due to the miraculous nature of his life, he wrote:

To go back to the origin of such laws there was an old decree that no one should be consecrated a god by an emperor till he had been approved by the senate. Marcus Aemilus followed this procedure in the case of a false god, Alburnus. This reinforces my argument that among you, godhead is conferred by human approval, if a god does not satisfy man he does not become a god, so according to this it is for man to show favor to God. Tiberius then in whose time the name of Christian came into the world, when a report of this doctrine reached him from Palestine where it originated, communicated to the senate making it clear to them that he favored the doctrine. The senate however, because they had not examined the doctrine for themselves, rejected it. But Tiberius stuck to his own view and threatened to execute any who accused the Christians